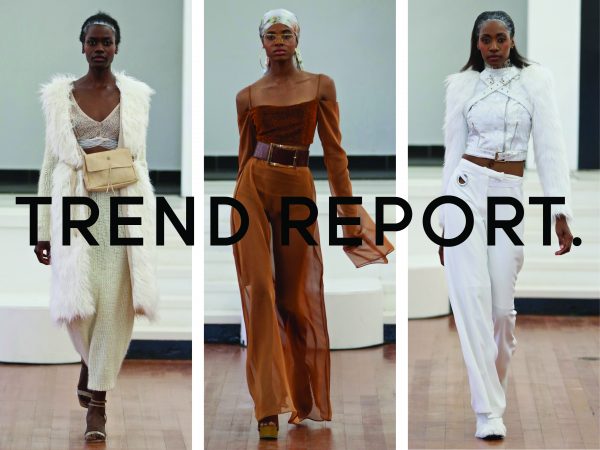 November 2016 saw CTCFDs Annual Fashion Show take place at The Bancroft Studios in Vredehoek. With incredible third and fourth year graduate collections on show, we rounded up 5 of the most popular trends seen on the runway.

With layering being a major trend on a global level, we saw a number of graduate collections of 2016 incorporating layering into their looks. Amber-Rose Hennings’ brand A-Seam Studios and Rebecca Odendaal’s brand ODE saw neutrals and sheers being layered over each other to create depth in their looks. Betty Keet Design Award winner Paige Martins’ brand Outline saw the layering of matte and shine textiles alongside a number of textures of faux fur and Perspex for highly detailed black and white looks.

Bell sleeves, wide cut trousers and velvet textiles were seen all over the 2016 runway. Kristina Ohlsen’s brand Gisele was inspired by her mother’s childhood while living in Tanzania in the 1970s; her collection showed a strong focus on lurex, floral scarves and glamorous disco styling. Anke Nel’s brand, Frank Gordon offered wide legged velvet and velour jumpsuits and tracksuits that screamed 1970s.

Colour palettes were polarized on the 2016 runway, with brights prevalent in a number of graduate collections. The most seen colour palette, however, was that of neutrals. White, nudes, beiges and light pinks were seen in collections by Amber Rose Hennings’ brand A Seam Studios, Robyn Seager’s brand Nirvanic and Rebecca Odendaal’s brand ODE.

Genderless dressing and the concept of androgyny has been on the rise on a global level. This was explored on the CTCFD runway in Robyn Seager’s brand Nirvanic, which incorporated a feminine colour palette and longer, more voluminous shapes that aren’t traditionally seen in menswear. Zero gender was also seen in Maruwaan Galant’s brand Facade, whose collection concept offered a narrative that explored the concept of androgyny in his womenswear collection.

With neutrals seen in a number of collections in the 2016 runway, another major trend was the inclusion of digital printing. With artwork designed by the students, this offered a highly individualised approach to their concepts. Tara-Leigh Coetzee’s brand Oxide incorporated abstract images of her grandfather’s tools, while Truworths Design Competition winner Naeelah Jumat’s brand Socioculture looked at graffiti as a tool for rehabilitation of gang members.